Bill sat high up in his DJ tower over looking the frenzied dance crowd down below. He had just started spinning Madonna’s Vogue and the players on the floor were hitting some serious poses. One guy had his right arm up in a salute and the chick he’d been slapping around had her face down in his crotch, tongue going up and down fast, in perfect time to the beats, pretending to do the nasty.

Her licks looked like they were coming in right on target, about 125 per minute. The tongue never seemed to slow down.

Another couple on the floor was bee bopping in 2/4 time and was swinging his partner round in circles like a rag doll. But they were hitting their marks perfectly every time. Not bad considering he had to get her all the way around to land it. But that Janet Jackson crew over in the far corner carving out a semi perfect rendition of Rhythm Nation, now they were impressive! Banging it out on the down beat, 130 beats per minute exact.

Boy, were they ever on point! Looked like their troupe had been practicing since they were born. Not a foot out of line, not a step right when it should have been left. A precision drill team, hitting their marks, spot on every time. Bill would have to stay on his game to keep this this crowd grooving happy.

He leaned down to pick out the next set of discs. Let’s see. Kool and the Gang’s newest on the Celebrate CD was calling to him. It was 125 to 135 BPM’s all the way, right on track with what the crews were slamming out down below. But to be sure, he needed to count it.

He grabbed the massive headphones and stuck them on his ears. Madonna shouted in his left ear, while K and gang rang in his right. He counted, drumming the reps out with his fingers.

Eight reps per set, eight sets per move, two moves per step down below. 130 beats per minute That’s what he was going for. A disco ball flashed in his face. He squinted and held out the left ear to hone in;

Let’s Get this party started, ya’ll.

Thanks to spectacular photo for this.

OK, who hid the bones?

Sweet, sour, sexy, or salty? These guys got it all covered!

Not sure which is me, but I’m considering the little one in the front, all the way  to the right – Black and white, with small ears and a big smile. Or maybe, the black poodle-doodle in the third row right – with the curly hair and white chest markings!

What’s got you barking today??

Any way you slice it…Gotta luv a good dog face!

Wow, Kudo’s to Mr. Lauden for another great interview. Now I can’t wait to read Mr. Rensin’s book on Miki Dora.
I can so relate to it all, since I grew up in So. Cal, with a brother who lived to surf, basically two, three times a day, every day, and who had the same frame of mind with regards to the crowds in the waves as Dora did.
Especially laughed hard when he said that Dora would literally toss them on their boards if they got in his way!
Oh, Rensin gives some solid tips on co-writing for new authors. too. 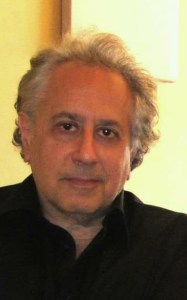 What: Author and co-author of sixteen books, seven of them New York Times bestsellers. They include: ALL FOR A FEW PERFECT WAVES, the oral/narrative biography of legendary rebel surfer Miki Dora; THE MAILROOM, an oral history of what it’s like to start at the bottom in show business reaching for the top, and DEVIL AT MY HEELS and DON’T GIVE UP, DON’T GIVE IN—both with Louis Zamperini.

Interview conducted by email. Some questions and answers have been edited.

Your oral history of Miki Dora’s life, ALL FOR A FEW PERFECT WAVES, is the definitive portrait of the legendary surfer. How would you explain Miki Dora to somebody who has never heard of him before? How did your opinion of him change researching and writing the book?

Miki Dora personified the rebel heart of surfing. He was king of Malibu when that break was queen in the 50s…

Hey all you fellow novices
This might be just what you’re looking for. An even playing field, so to speak. I’m definitely looking into it! 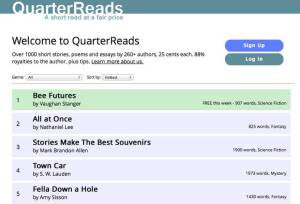 Late last year I interviewed Ian Rose, founder of a short fiction website called QuarterReads. If you haven’t checked QuarterReads out yet, it’s a pretty cool site where writers can publish short fiction without an involved submission process. Readers can read those stories for only 25 cents a pop, as the name implies. Most of that money goes to the writer. Here’s what Rose had to say about it in our interview at the time:

QuarterReads is different because we’re trying to carve out a space between the magazines and the self-pub community. The former has great quality but a limited scope and focus, determined largely by the wonderful editors that run those markets. The latter has more in terms of quantity than you could ever want, but lacks even the most basic quality control, allowing for the complete range from dreck to…

author of 'The Warehouse'