Hi there kids and kidettes,

It’s Monday Musing time again, and todays topic just happens to be inspired by a recent guest post from Aimie K. Runyan on multiple POV’s, from one of my all time favorite writer sites, Writers In the Storm, at:  (http://writersinthestormblog.com/2016/01/10-tips-to-writing-from-multiple-povs/). 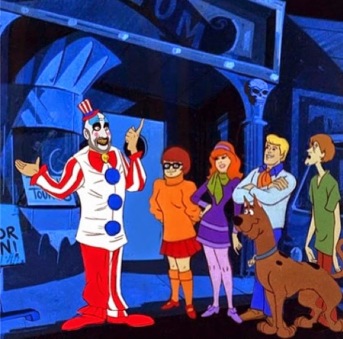 Ms. Runyan’s post caught my eye because my novel in progress indeed falls into this complicated, yet fulfilling category, with multiple characters telling the story and moving the plot forward with their own unique quips and quirks, and hopefully, keeping the reader engaged invested in turning the pages far past their alloted bed times.

Case in point: just check out this Scooby pic:

Don’t know about you, but the one thing I recall is that each and every one of them wanted to uncover and take credit for figuring out the “who” in the “who done it” part of the game. Sure, they started every show as a collective we. Loaded up in the Scooby van driving to wherever their mystery of the day might take them. But once there, they always split up, no? Giving us scenes, from you guessed it, multiple Pov’s.

First, we’d usually get serious Fred, all orange Ascot and arms crossed Rambo style in front of his chest, scowling as he deduced the nature of the crime (single pov). And most of the times he’d be accompanied by Daphne, the ginger haired Barbie, and off hot on the trail of the bad guys. (another separate pov chapter). That is, when Daphne wasn’t busy playing damsel in distress, getting kidnapped, tied up or gagged, (a whole separate pov) in which case usually Scooby and Shaggy (yet another pov scene) would fly in to the rescue from some other scene where snacks of all conceivable shapes and sizes preoccupied the moment. Or sometimes it was Fred, who’d swoosh in to save the day hot off a solo scene from tracking down villains or ghosts (main detective pov). And of course, we can’t forget about Thelma, intelligent, reporter girl Thelma, interviewing potential suspects and witnesses, usually solo (yet again, another reporter, cop pov.)

Thanks for indulging my digression into retro cartoon mania. But, there’s a point to it all (hint: multiple points – haha).

And as Ms. Runyan points out in her post, beauty can be achieved in the magic of cohesion, as long as it’s pulled off well. Right now I’m writing my first go at a multiple pov novel, and it makes my Scooby example but a paltry simplified version of the real thing and of Ms. Runyan’s musings. And since I couldn’t begin to state it better myself, here are the main highlights from her “10 Tips to writing multiple POV’s”:

(her original full post can be found at: http://writersinthestormblog.com/2016/01/10-tips-to-writing-from-multiple-povs/):

“These are some of the methods I used to weave three separate narratives into one cohesive story:

So, that’s it for today folks. But I leave you with a question:

What are you working on? Does it have multiple POV’s? And how’s it working out for you?

Luv to hear your thoughts!

Ciao for now, and darkly yours,

(much thanks to Aimie K. Runyan and Writers in the Storm; and the post,  10 Tips to Writing from Multiple POVs | Writers In The Storm.)